The school year ends at the end of December in Peru. The last days of school are strongly imbued with the Christmas spirit. Overview of traditions and highlights in schools:

Tradition has it that pupils get hot chocolate and a panettone. Schools, whose financial means are limited, ensure that the chocolatada is offered by individuals, associations or by the municipality.
In Huchuy Yachaq, Doris (from Cusco and regularly hosting Los Chicos de Cusco volunteers) donated pannetones during the end-of-year show.

In ASVIN and Picol, the Municipality of San Jeronimo organized the Chocolatada. A moment punctuated by
activities to entertain the children, provided by three animators: songs, dance, games.
Good humour and guaranteed laughs 🙂

The directors of the schools were pleased twice because this reveals the consideration of the municipality towards their establishment, a consideration which did not seem to have been won in past years (the public authorities supporting very little projects far from the historic centre of Cusco).

We could compare these festivals to the fairs that we know in France. On the program of these “fiestas de clausura” (closing parties): song, sketches, dance,… For teachers, it is a space for artistic creation ideal for
developing the creative spirit of students and self-confidence; for children it is an opportunity to play in front of an audience, to excel and have fun; for parents, it is a pride to see their children perform.
The rehearsals start a few days before the show. Everything is not yet perfect but we know that on D-Day the magic of the live-show will work 🙂

In Picol, place for the talent festival

Friday, December 13th was the first edition of the School Talent Festival on a more than important theme: the rights of children.
Nearly an hour of show in the presence of a few parents. It was an open stage where their children expressed their rights (to study, not to be abandoned, to be in good health,). Strong messages that have an impact on us. The smaller ones were accompanied by their teacher and played sketches of situations that can occur in certain families: children going to work rather than going to school, sick children without care …

Grados 2 sang and danced, pupils of Grado 5 played abandonment of a new-born, Grades 3 child played labour on the street …

The children of the Las Hormiguitas kindergarten (3-5 years old) gave us a beautiful show that made us smile for a long time!
After singing the Peruvian and then the Cusquian anthem, the children played the story of the birth of Jesus, the Christian religion is deeply rooted in Peru.

Then a succession of dances took place, as well as songs in Quechua and Spanish. Precious moments filled with good humour that create memories for everyone.

Being in Cusco until the end of December, gave us the opportunity to spend a Christmas in Cusco. Often we wonder what the traditions of other countries are during this period. Well in Peru, for those who celebrate
Xmas, we share family meals (including the traditional turkey and pannetone), we offered gifts, believers go to mass, …
However, there are also some specificities such as the fireworks that everyone shoots. As from 11:30 p.m., we heard the first detonations. At midnight and for more than an hour, the city is tinged with a thousand lights, we do not even know where to look as there are so many lights going off every second. A certain fear settles because these are shot in the streets or from the gardens of the houses. Here no security perimeter and we
could not avoid thinking that projectiles might land on the houses …

The market of December 24 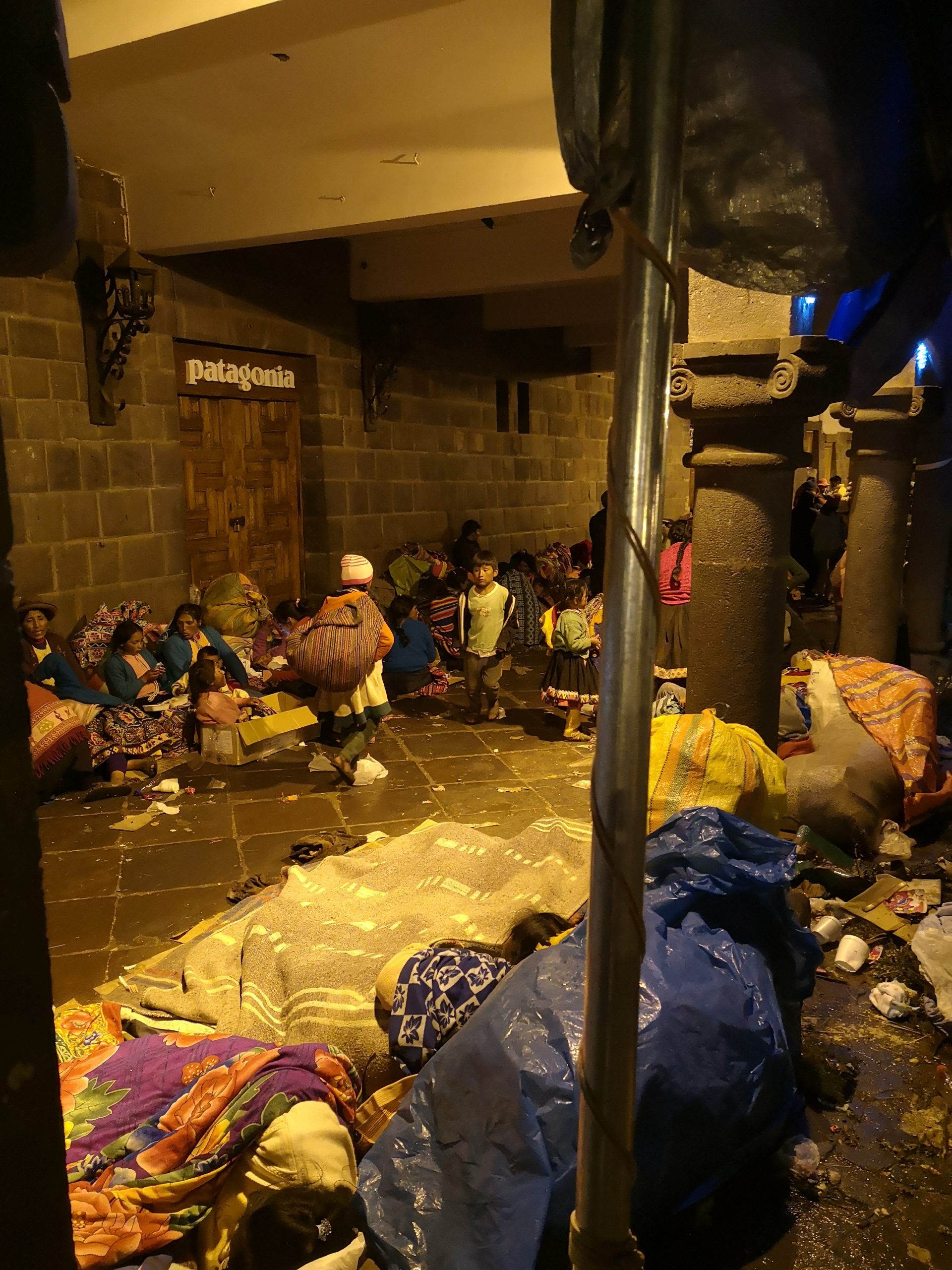 A Christmas market is held every December 24 in the Plaza de Armas in Cusco. Sellers sometimes come from far away, including isolated campaigns to earn some money. In the adjacent streets, hundreds of children are
there with their families, selling, killing time, sleeping on the ground. Some small children have haggard eyes; fatigue can be seen on the faces of many of them… We spoke with some parents and they told us that they could not leave their children alone in the village. Families come all together and sometimes it takes many hours travelling to come to Cusco… A different and harsher Christmas for these vulnerable people. A feeling of nervousness, helplessness, and empathy arises. We feel that Christmas has become far too commercial and is widening inequalities between people a little more. What can be done to stop this sad reality? Local associations are distributing hot chocolates and hot dishes on that evening.