In July, our country celebrated 200 years of independence, amidst great political, economic and health instability. The elections were won for the first time in 200 years by a teacher, a peasant, mostly elected by the part of the population traditionally kept apart from the country: the province population. This caused major conflicts in all state institutions. We have a parliament who is against the executive, a weak and inexperienced executive, and a rather corrupt judiciary system.
In fact, the conditions haven’t changed much. All this political instability has had major repercussions on the Peruvian population: the cost of living has increased drastically (gas has gone from 35 soles to 55 soles, oil from 6.80 soles to 12 or 15 soles, and so on.) In terms of health and pandemic management, the political transition slowed down the vaccination campaign with a heavy impact on access to employment for vulnerable populations. Vaccination of people over 38 is underway in our region but there is no set schedule for the coming weeks. In the last survey carried out among the families of las Hormiguitas, the elderly and those of age to be vaccinated were vaccinated, but the majority of those under 38 had not been vaccinated and have not been scheduled for vaccination. The professional situation of this segment of the population is undeniably critical, especially when it comes to people working in the informal economy: either they do not go out to work as freely as before, or they risk contamination, in a context where the Delta variant more particularly exposes young unvaccinated populations.
We cannot fail to mention that the political context of these days has generated a sense of reparation and recognition among the most forgotten populations. The Prime Minister’s speech in Quechua has deep meaning for men and women in rural areas, whether they are in the countryside or migrants in the cities.

The decree on the suspension of face-to-face lessons is still in force. It seems that the resumption of classes is planned for the start of the school year, but new decrees should be published for mixed education (face-to-face and distance), the organization of which will be left to the discretion of each establishment and will have to take into account the characteristics of the school infrastructure, parent and teacher agreement and the evolution of the epidemic in the academic area.
The decree authorizing face-to-face lessons in rural areas suffered some setbacks during its application. Some teachers’ unions have prevented teachers from attending rural schools, citing the lack of vaccination.

At the Las Hormiguitas Kindergarten 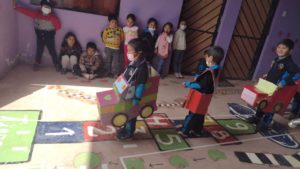 Nine 3-year-olds, 20 4-year-olds and 17 5-year-olds are currently in school. We continue to develop the following strategies:

– Virtual classes, classes recorded and sent by WhatsApp. The child then sends a photo or video of their work.

– Face-to-face sessions in groups of 5 children: 3 hours three times a week in April, two 4-hour sessions in May, three full-day sessions (8 a.m. to 1 p.m.) since July.

A meal and a drink are served to all children who participate in the classroom sessions. We still have home visits in order to have contact with children who do not participate in face-to-face classes or who do not send their work by telephone. We also identify children who encounter problems within their family that affect their schooling or their health. We assess their needs and help them where possible.

– Permanent disinfection of the premises, provision of alcoholic gel in the classrooms, paper towels, wet wipes and soap.

– Surgical masks are also available for children or adults who do not bring them. We’ve found that many use sheet masks because they are reusable, but we know they don’t protect as they should. We therefore provide them with masks and inform about the importance of their use.

– Limited circulation of educational material and material intended for use by children in the classroom. The class teacher is responsible for disinfecting the equipment.

As soon as we could welcome children again in the biblioteca and open spaces, we proposed again leisure and academic support activities in the afternoons. As from March, we have run two refresher courses and since June three small groups take turns. Currently, at the social centre, 22 primary school children and six secondary school children follow school support.

The theatre workshop has been taking place in a classroom since April. To facilitate the socialization of the children and to improve their performances, we mixed groups (boys and girls of different classes) according to the parents’ availability. Since June, each class has its workshop.

The following workshops are planned: