The Picol elementary public school is located in the district of San Jeronimo in the south-east of the city of Cusco, in an area of peri-urban altitude, at the foot of Mount Picol. At the beginning of the school year in March, 134 children from of six and twelve were enrolled in Picol school. The school year never began. The confinement started the day before. 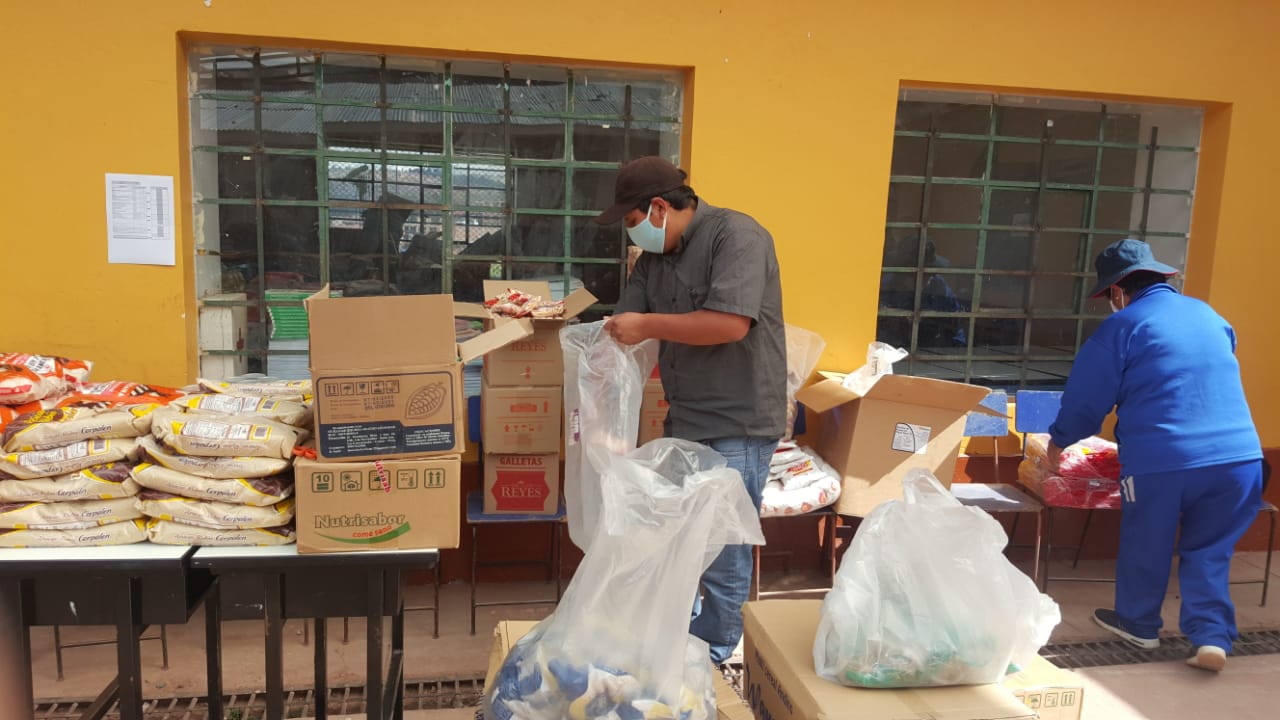 A large majority of the parents of pupils at the Picol school come from rural migrations. Their mother tongue is Quechua. Most of the children live in the districts of San Jeronimo and San Sebastian and a few in more distant districts such as Saylla. Few children live near the school. They get there on foot and by bus, some have to take two buses to reach the school.

Many parents did not finish primary school and some never even went to school. They can neither read nor write, are not fluent in Castilian and have no technical or professional qualifications. It is therefore very difficult for them to find legal and stable work. They live from street vending,  household, masonry work. Some own fields and cultivate them. Their accommodation is very basic; many families are crowded into one room. Since the start of confinement, parents have been without work and without means of subsistence.

In Peru there is an important phenomenon of rural exodus to cities because rural areas are very poor. But those who migrate to the city find it difficult to cope and remain vulnerable and marginalized. Picol pupils have great learning delays in all subjects and the Covid epidemic reinforces social and cultural inequalities, as most households do not have access to networks and digital equipment and are not initiated into computing. Some have neither radio nor television.

“I learn at home”, a national educational program broadcast on television but not easily accessible to Picol schoolchildren

After a state of amazement and a period of great anxiety for everyone, the teachers of the elementary school of Picol began searching and locating their pupils. Almost half of the families (45%) have returned to their native rural communities in order to simply have enough to eat. 20% of families rarely give news and teachers remain without news of one in eight children.
According to the educational team’s estimates, 85% of children follow the program of the educational platform “Aprendo en casa” (“I learn at home”) broadcast on television and offered by the Ministry of Education. But children have difficulty following the national program: many report that the animator speaks quickly, with words they do not understand. And it’s the same with radio programs.
Unfortunately, they don’t have access to virtual platform programs on the web – there are texts, videos, full sessions – but they don’t have a tablet, and even less a computer.
Teachers follow up and provide pedagogical support to their pupils. 70% of children take advantage of this support, which consists most often of telephone calls and more rarely in WhatsApp exchanges. A majority of families have telephone subscriptions that allow them exclusively to receive calls. Teachers are confined and rarely go out.

The immediate need for children is food

The results of the survey conducted by the educational team show that almost all households are facing economic difficulties and 90% of them cannot afford to eat properly.
Teachers distributed food from the school food program to the families with prior agreement from the authorities. This food was meant for the canteen. They distributed as well clothing for certain children and school materials so that they could work. Today, the teaching team is organised to give each family a basket with basic foods: milk, quinoa, lentils, tuna, beans, flour, oil.

For Yovana Elida Rosell, director of the Picol school, “The immediate need for children is food. The other important but not essential need would be to be able to rely on a basic technological tool to access information and activities enabling them to develop learning. But the most important is the physical and mental health of children and their parents. We try to reassure them when they tell us of their fear of losing a school year, of learning nothing, of seeing their gaps deepen.”

Yovana notes with optimism that children in rural communities are developing different learning through the work of parents and
grandparents, such as the cultivation and harvesting of land products, livestock farming, and other forms of knowledge that reaffirm
their cultural identity.

Supporting the school and its beneficiaries during this difficult time